Posted on August 4, 2015 by womenscaucusonasean

ASEAN governments are drafting their 10 year vision for the region, making it clear they envision enhanced economic integration as a way towards economic growth- but not much else. Leading women’s groups in the region are demanding a new ASEAN Community, saying the current ASEAN vision risks being a continuation of the flawed political and economic systems which prioritise corporate and investor interests over human rights, cause gross inequalities, and are the sources of the current climate crisis.

Recognising that the current ASEAN vision neglects many critical areas crucial to a people-centered development, the women’s groups reject the current structure of the ASEANand call for a restructuring of the ASEAN pillars to five new pillars which reflect the five transformative shifts of Development Justice: Economic justice, Redistributive justice, Social and Gender justice, Ecological Justice and Accountability to the People.

Representatives from thirty women’s groups from the Southeast Asian region gathered for a Roundtable on Alternative Regionalism and ASEAN Women’s Blueprint, which was organised by the Asia-Pacific Forum on Women, Law and Development (APWLD) in Kuala Lumpur on 20-21 April 2015 to articulate their own vision of a developed ASEAN. The resulting document “Vision 2025: ASEAN Women’s Blueprints for Alternative Regionalism” has been submitted to the High Level Task Force, aimed at influencing ASEAN Coordinating Council’s draft on the ASEAN post-2015 vision.

The submission emphasises that the ASEAN has promoted a harmful contradiction. Member states have abandoned ASEAN principles of ‘non-interference’ and ‘state sovereignty’ in relation to capital and economic policy but doggedly retained them in relation to human rights. The modern ASEAN has embraced giving rights and freedoms to foreign corporations while denying them to ASEAN citizens. END_OF_DOCUMENT_TOKEN_TO_BE_REPLACED

Posted on June 19, 2015 by womenscaucusonasean

The Southeast Asian Women´s Caucus on ASEAN has demanded stronger accountability mechanism in ASEAN region on the elimination of Violence against women (VAW) in its submission to the ACWC-ACW Working Group.  Welcoming the initiative under the leadership of ACWC (ASEAN Commission on the promotion and protection of rights of Women and Children) and ACW (ASEAN Committee on Women) to substantiate and actualize ASEAN’s commitment to eliminate VAW, Women’s Caucus provided comments in the letter and also direct edits into the first draft document of ASEAN Regional Plan of Action (RPA) on elimination of Violence against Women.

Women’s Caucus called for ASEAN’s urgent attention on VAW and for elimiantion of VAW be taken as priority.  It said “Even after the twenty years since the adoption of Beijing Declaration, there has been little improvement in the elimination of VAW, and ASEAN has unacceptably high rates of violence against women. ”

END_OF_DOCUMENT_TOKEN_TO_BE_REPLACED

Posted in ACW, ACWC, ASEAN Commission on Promotion and protection of Rights of women and children, ASEAN Committee on Women | Leave a comment

Posted on September 25, 2014 by womenscaucusonasean

Women’s Caucus Laos organized a short consultation with WC Cambodian Focal Point Ms. Thida Khus. Eight WC Laos friends joined the discussion where overview of Women’s Caucus on ASEAN was given along with updates from its last annual meeting, its recent accomplishments and upcoming activities. WC as a model in setting up women’s movement through Capacity Building, Knowledge, resources & tools development, Advocacies were highlighted.

Meanwhile, Thida further shared about WC Cambodia’s experience on ASEAN engagement, especially setting up its own Cambodian Women’s Caucus. The need of having patience, persistence, and coalition and sisterhood were highlighted by Thida in successful women’s movement building. 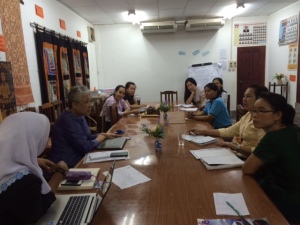 END_OF_DOCUMENT_TOKEN_TO_BE_REPLACED

Posted in Laos, Women's Caucus in 11 countries | Leave a comment

Posted on June 3, 2014 by womenscaucusonasean

Sunee Singh, Program Officer – ‘Grounding the Global Regional Mechanisms’/APWLD (Women’s Caucus Secretariat),  shared about brief herstory of Women’s Caucus on ASEAN, its functions, structure and accomplishments in having successfully built capacities, conducted meaningful advocacies and most importantly strengthened women’s  movement . The queries most received on were on how Women’s Caucus on ASEAN functions.

Pacific Women took it with great interest along with considerations and desire to set up their own Women’s Caucus (for say on Pacific Islands Forum/ PIF). It is proud moment for Women’s Caucus for setting a model for women’s movement around regionalism.

Posted on May 26, 2014 by womenscaucusonasean

Brunei’s new Syariah Penal Code Order 2013 has provisions that clearly infringe on universal human rights and will open up women, children and sexual minorities to more violations. With harsh Syariah law embraced, what will happen to the fate of women in Brunei? ASEAN needs to take action.

The statement attempts to point how the new penal code violates international human rights and Brunei’s own committed obligations under ASEAN. The new Syariah Penal Code Order is a major regression for human rights in Brunei Darussalam, and in ASEAN. Hence, Women’s Caucus through this statement urges ASEAN and its sectoral bodies, particularly AICHR and ACWC to refer to ASEAN Human Rights Declaration. Article no. 39 explicitly calls for inter alia cooperation to fulfill commitments to the promotion and protection of human rights and fundamental freedom in accordance with ASEAN Charter.

Posted on May 15, 2014 by womenscaucusonasean

The Terms of Reference (TOR) of AICHR scheduled for its review this year saw its first consultation on 28 and 29th April 2014 in Jakarta, Indonesia. While on 29th April, AICHR conducted consultation with CSOs that included SEA Women’s Caucus on ASEAN members and its co-convenor APWLD.

The Consultation, laudable for AICHR’s efforts towards engaging with CSOs further establishes that CSOs are being more viewed as partners.  This historic TOR Review opens up opportunities to further strengthen AICHR in its contribution for progress towards enjoyment of human rights.

END_OF_DOCUMENT_TOKEN_TO_BE_REPLACED

Posted on May 8, 2014 by womenscaucusonasean

Following the rejection of nominees elected by CSOs as Interface Delegates in the countries namely Cambodia, Malaysia and Singapore, Women’s Caucus have submitted its appeal to the Committee of Permanent Representatives to ASEAN to immediately permit the nominees previously selected unanimously by CSOs, or be allowed to make another selection, or to leave the space vacant.

Women’s Caucus stressed that the act of sheer rejection of the CSO representatives, selected through democratic national process, goes against ASEAN’s drive towards people-oriented ASEAN, if not people-centered. Without the genuinely selected CSO delegates, the Interface meeting scheduled for 11th May, 2014 will not serve the actual purpose and meaning of Interface meeting. Without democratic participation of its people, ASEAN community building will be meaningless.

The letter can be accessed here: WC_Appeal_accept.for.Interface.CSOs.reps

Posted on March 25, 2014 by womenscaucusonasean

Women’s Caucus’s participation through two workshops ‘No Genuine Community without ASEAN Women’ and ‘ASEAN Community free from VAW’ and through two plenary speaking spots in ‘The ASEAN in the Prism of Globalization and Multipolar World’ and ‘Where are the people in ASEAN  2015 integration and beyond?’, was able to highlight the importance of women’s role in ASEAN community building process. To re-emphasize on the greater role of women and need to address women’s issues, WC members drafted a joint statement, in the spirit of largest civil society event held so far in South east Asia, the ASEAN Civil Society Conference/ASEAN People Forum 2014 in Yangon, Myanmar. The link of Statement is: WC_Joint Statement-ACSC 2014

Posted on February 28, 2014 by womenscaucusonasean

APWLD and Women’s Caucus representatives who attended 19th February CSO Dialogue drafted a follow up letter to ASEAN Commission on the Promotion and Protection of the Rights of Women and Children (ACWC). The Dialogue which was on on the implementation of the Declaration on the Elimination of Violence Against Women and Elimination of Violence Against Children, and the ACWC work plan for 2012 – 2016 was attended by:

The letter reiterates and draws attention on points raised during the dialogue and reaffirms its commitment to assist ACWC. Please click in the following link for the letter. Link is: WC_Followup letter.19th feb.Dialogue_28.FEB.2014

Posted on February 5, 2014 by womenscaucusonasean

The purpose of this brief analysis is to assist the reader to understand the positive points and the shortcomings of the ASEAN Declaration on the Elimination of Violence Against Women and Elimination of Violence Against Children adopted at the 23rd ASEAN Summit on 9 October 2013.  Principally drafted  by the ASEAN Commission on the Promotion and Protection of the Rights of Women and Children (ACWC), this declaration could give hope amidst disappointments. Below is the quick look at the DEVAW and EVAC.